I have worked with animals on film sets, promotional videos, television and weddings. It is often said that children and animals are the hardest to work with in film and I can definitely see that. They have a mind of their own especially with a lot of new people around in a fast-paced environment.

When I worked as a 2nd assistant director on Save My Pet, we had animals ranging from ferrets to cats and dogs. The day would be about what you would expect but we had excellent animal wranglers who seemed to do the impossible when it came to over-excited fur babies. The one thing that most wranglers seem to do is limit the attention to the animals by crew members. You can’t have 30 different people coming up to a dog and playing with it while you are trying to calm it down for a scene where it is supposed to be calmly sitting by its owner. Also, the animal was only ever on set when it needed to be. When shots were being set up, the animal was put back in his/her quiet place so they wouldn’t get scared from all the noise/commotion of changing lights/camera setups.

For weddings, I usually don’t even attempt at getting a shot of a dog or cat until the novelty of me arriving has worn off but I always have my camera ready just in case. This is because animals move around so much when they are excited and it is near impossible to get a focused shot of them.

Dogs and cats love to sniff every piece of equipment so I usually let them do that then try to get them in a nicer background without equipment in it. It is great to get a shot of them acting normal in their own environment but I will be completely honest, what I often end up have to do is going to a room alone with them and dangling a treat behind the camera as they stare at it then I get a good shot before they start drooling. This is the “magic” of working with pets haha. They just get super excited when new people are around so if you get a chance to work with them before everyone arrives then that should work well for you. Most dogs are very hyper with all the wedding commotion but not all, so you kind of just need to play it by ear. Having the bride and/or groom around for a shot can be really cute too so I recommend getting them in the shot if you/they have the time. 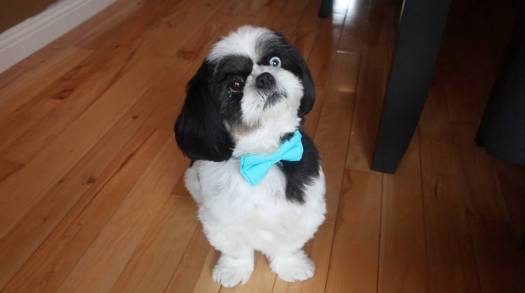 Now for cats. I absolutely love cats but they are much harder to get a good shot of at weddings. Cats and dogs were not domesticated the same way so they have very different personalities and they interact with their owners in a much different way. Dogs were domesticated by humans for work and companionship, they are naturally people pleasers and are devoted to their owners.

Cats are not quite the same. Humans did not domesticate cats, they domesticated themselves. Cats started hanging around humans because of the rodents that followed humans around. It was an opportunity to get food. Humans benefitted from having cats around so they eventually began to take them in as pets in their communities and homes.

This is not to say cats don’t love humans, they just love them in a different way. Like dogs, cats have individual personalities. I had one myself that had the personality of a dog and followed me everywhere and would never scratch anybody no matter what you did with him. His name was Sir Francis Poe Hufflepuff, see his handsome picture below, he was as soft as he looks :). I have also been around cats that will allow you to pet them but then out of nowhere will take a good swipe at you with their claws out because they felt like their petting time was sufficient (thanks Meowth).

I definitely find that cats take time when you are trying to shoot them on video. Unlike dogs, cats very rarely get happy excited around people because their environment is being upset so they will tend to hide. You really just need to take your time with them and also use treats when possible. I would suggest also going into a separate room with them and let them rub their scent on your equipment so they feel more empowered (it works I swear). I also find that it works better with cats if you stay in one place and just point your camera at them versus chasing them around the room. If all else fails, just get one of the owners to work his/her magic and pick up the cat so you can get a shot of it being still in his/her arms. I love the shots of owners and their pets so this is one I will usually try to get anyway but it’s also nice to have a shot of the pet on their own just in case.

That’s it so far for my advice on shooting animals on film sets and in weddings. I am sure I will come across some more tips, so I will update this blog when the time comes!